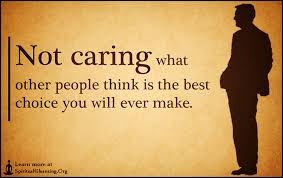 They say you stay up too late and got nothing in your brain? It’s normal to care what important people in your life think of you. But if caring too much makes you stressed or you live your life by others’ expectations, it may be time to push back.  Savvy Psychologist Dr. Ellen Hendriksen offers nine ways to stop caring what other people think.

When it comes to what people think of you, it’s been said that “bad is stronger than good.” In a given day, if you hear ninety-nine compliments and one criticism, you know which one will be running through your head as you try to fall asleep that night.

It’s normal to care what people think—most of us care deeply what the people we love and respect think of us. Indeed, it’s hard-wired: not so many hundreds of years ago, banishment was the worst punishment possible. We needed the group just to survive, so our good standing with that group could actually mean the difference between life and death.

Fast forward a few hundred years. These days, we may not rely on a group for food or shelter, but we still rely on those around us for belonging and support.

But ask any given self-help guru about whether you should care what other people think and you’re pretty much guaranteed to get heated advice about how to stop giving two somethings or a flying something else.

Herein lies the problem: the tone of a lot of “how to stop caring” advice is intense and contemptuous, and, at least for me, leaves me feeling like I need to accessorize with an eye roll and a straight-out-of-the 90’s “talk to the hand” stance. Not my style, and likely not yours either. (Plus, I always suspect such a vehement reaction means they doth protest too much, methinks, and therefore actually do care—a lot—what people think.)

So let’s go for a middle ground.  You want to be able to hear constructive criticism from people who matter to you, while filtering out the gossips, mudslingers, and plain old jerks.

This week, we’ll offer a kinder and gentler version of “how not to care.” So when the haters gonna hate, here are nine ways to shake it off.

Tip #1: Specify who you’re worried about. Our brains love to overgeneralize. If your brain makes you worry that “people” will judge you, “everyone” will think badly, or “someone” will yell at you, ask yourself who, exactly? Name names. List the specific people you’re worried will judge you. And watch as “everyone” shrinks to just your boss and the gossipy receptionist, not actually everyone. There: much easier to deal with.

Tip #2: Identify whose voice it really is. If you’re afraid of being judged, even though no actual judgment is on the horizon, ask yourself who taught you to be afraid. Did someone in your childhood always fret about, “What will the neighbors think?” or say things like, “Hmm, we’d better not do that. People will think it’s weird.” It could be that the urge to people-please was soundly drilled into you from another generation. The good news? Whatever unhelpful beliefs you learned can be un-learned. With time and practice, you can replace, “What will the neighbors think?” with “Usually, others are too focused on their own lives to judge mine,” or “Most people are accepting and open,” or “Few people will go out of their way to give negative feedback.”

Tip #3: Don’t get defensive as a reflex. If the basketball arena in your mind yells DE-FENSE, DE-FENSE as a knee-jerk reaction to every criticism, consider doing something revolutionary first: listen. When we put up a wall of defensiveness immediately, everything hits the wall—gripes and complaints for sure, but also good advice and helpful feedback. After you’ve actually listened, you can sift through and decide whether any of the feedback might actually help you do better.

How to Achieve your Ultimate Goal